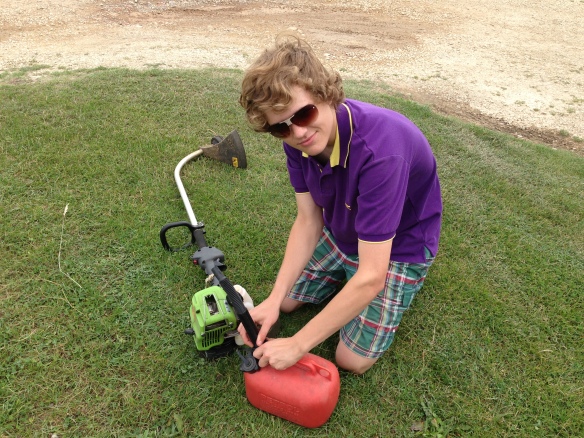 Job one today is the strimming – so Frackle1 assigned himself to setting up the strimmer – sporting the essential “Elvis” sunglasses (Vegas era). This was  relatively pain free and after a few strenuous arm pulls, he was off and running – tidying up the edges of the plot. By the time he had finished there was actually enough hay to form a rather good bale – but we had better things to do!

Frackle2 cracked on with the digging – there are still plenty of old potato plants on the plot so we worked on removing those before we started the big job of clearing the next patch of 5ft weedage. Interestingly, although the weeds come out relatively easily, the old turnips have grown super long tubers and are really tough to remove – we had a couple of comedy tug-of-war scenarios as 3 of us tried to to yank them out and ended up on the floor. 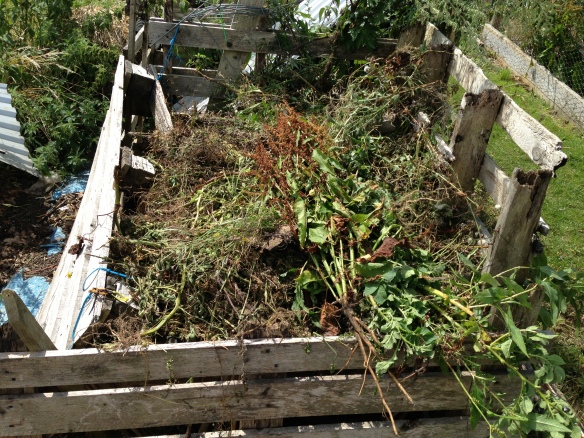 There are 3 compost areas at the back of the plot – largish bins made from old pallets – we’ve filled 2 already and so I think the first job on September 1st will be a bonfire (that’s the first date we’re allowed to burn plant materials on the site). Then we can start again and work on creating some proper compost!

After another concentrated session we have cleared two thirds of the plot now – we’ve left what I think is a small ragwort plant. I know this gets tons of bad press – we used to have a pony in another life and ragwort can be harmful to horses and livestock if eaten in large quantities – but here I can’t see it will cause a problem… and the bees love it! I need to do a bit of research on whether I’m right to leave it there, but Simon’s Allotment blog seems to agree with me – apparently there are at least thirty species of invertebrates which are totally dependent on ragwort as a food source and seeing as we are looking at this allotment project as a way of enjoying all things natural I can’t see why we should be eliminating something so obviously enjoyed by the other (non-human) residents.

The main thing in its favour is that it is a little “bee magnet”! I counted over 20 bees on that tiny clump of yellow and apparently “wise gardeners know that attracting honey bees to your garden is a good thing” – as Jaipi Sixbear tells us over on her lovely blog. She also points out that “bee pollination produces higher crop yields. That’s great for veggie gardeners” – I’m sold! And, if I’m honest, I think it looks wonderful. 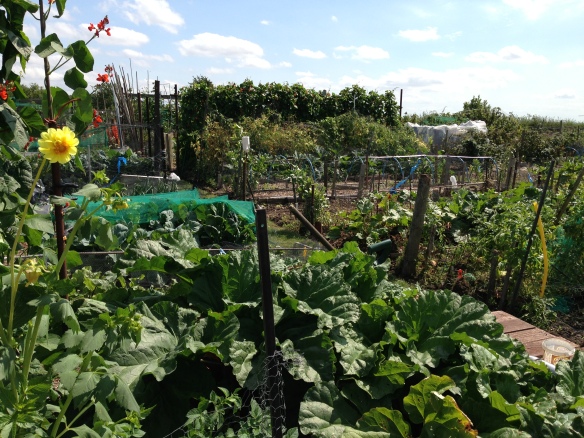 Now here’s an allotment we aspire to! It’s one of two belonging to Norman, our neighbour across the path as it were. It’s fantastic! Norman introduced himself today – worried I think that there were only three of us – his opening line was “Have you got a fella to help you?”

A fella? A fella??!!  I pointed out that Frackle1 and Frackle2 were as strapping a fella as anyone could need or want, as they were grafting away with strimmer and spade. I then relented and explained we were five, all told, and that Mr Frackle Gardener and Frackle3 would also be joining as some point. A conversation then ensued on mobile technology, running our own businesses, and how we wouldn’t want to miss out on a £60,000 job whilst we were down here – it wasn’t the topic I expected to cover when Norman (probably in his mid seventies) ambled over. I accepted his advice, but pointed out that in this day and age, I could be in constant touch with my office, nay the global business place, at any point if I so chose… but that I was happy to spend an hour away from all that in search of the perfect broad bean.

“Broad beans you say” … with that I was invited over for a tour of Norman’s wonderland of vegetable wondrousness. He grows everything – literally everything. I picked up plenty of tips. Key takeaways, though, were that you need to net your blackcurrants and gooseberries here, but amazingly (to me anyway) the birds don’t take the raspberries, and he had a rather good looking crop on the vine ( or whatever you call a raspberry growing structure – a cane??). The coup de gras – he took me to his broad beans, and gave me a whole batch that had now finished, explaining that we can dry them for seeds and plant them in February. Frackle3 will be delighted! Broad beans were on her bucket list…

Sign of a job well done? Mud over the face after a day down the pits… well, with the strimmer in the sunshine, anyway 😉

And here are the fabulous broad beans for seeds  – our gift from Norman. I am already looking forward to being able to reciprocate – although it may be some time and I think I’ll go for a pie or some such, as I’m not sure Norman will be in need of anything on the seed front!

And of course to round things off, here’s where we are at the end of Day 2. 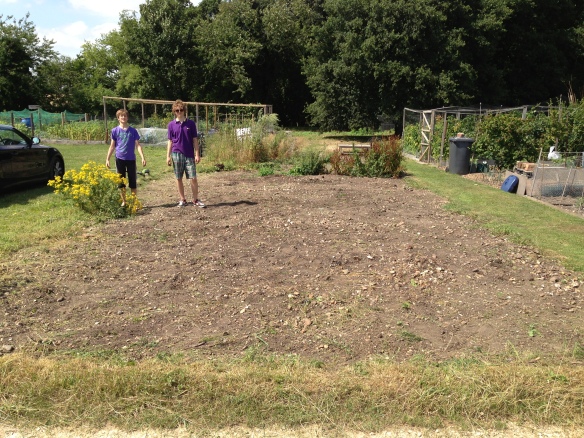