When it comes to sweetcorn we’re not experts – but we’d thought we’d share with you our experiences as we learn the ropes.

According to the Royal Horticultural Society on their RHS website, “sweetcorn is most successful in long hot summers”… and so maybe this will just work out for us even though we’re late getting it in!

The seeds were a gift to Mr Frackle from Frackle2 for Father’s Day and so we were in good time to sow them. They are a late season variety – Valencia – and so we met the deadline for the June sowing period. However, most varieties are sown earlier – here’s the recommended timetable for sweetcorn courtesy of the RHS:

Here’s where the trouble starts though – obviously we didn’t get our plot on the allotment until late July and so the seedlings were germinated at home under glass and then left in the seed trays until we were able to plant out, which has no doubt restricted their growth.

However they look healthy at the moment, so although we are some way behind the other sweetcorn plants we can see on other plots, it’ll be interesting to see how far they can catch up now they’re in a good place and where they should be! 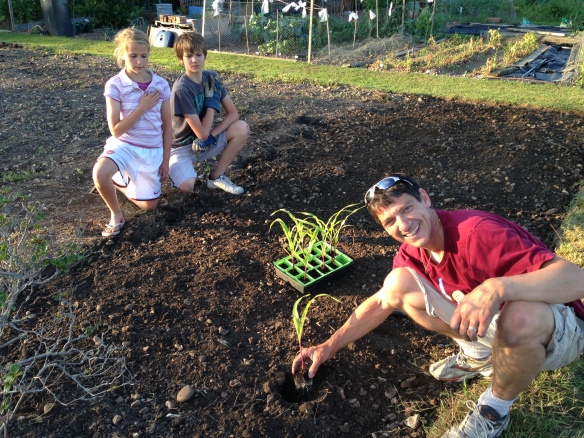 We read on the BBC website that sweetcorn is wind pollinated and best planted in large blocks, “…where the male flowers at the top of the plant have more opportunity to shed their pollen on the female tassels (where the cobs will form) below.” Isn’t that brilliant? What a way to go about the business of reproduction – we like its style!

Each plant will produce one or two cobs apparently, so it will be interesting to see the sort of yield that we get from these plants. Our plot is relatively sheltered and it’s very sunny – these are requirements for a good yield we’re told. Generally speaking you can grow these on any fertile garden soil.

It’s recommended that you add organic matter, like rotted manure, and rake in fertiliser before planting. They don’t like dry or heavy soil – which is good as ours is neither!

Here are the things we will need to do as we go forward from the RHS website:

Mulch with organic matter, to conserve moisture and suppress weeds and mound soil over the roots, which appear at the base of the stems.

Stake plants individually if they are tall or the location is exposed.

Water well in dry weather; this is vital when the plants are flowering.

Tap the tops of the plants when the male flowers (tassels) open to help pollination; poor pollination results in sparsely filled cobs. Liquid feed when the cobs begin to swell.

This batch is very much an experiment – if we can get some good data this year we will be ready to go large next year! Like the guys over at Rookie Allotmenteers,  a blog we love by the way and highly recommend, we are hoping we have created enough of a ‘block’ with our planting to allow for pollination. Let’s see…

Although these sweetcorn plants have plenty of obstacles to overcome, we’re looking forward to seeing what happens.

1 thought on “Growing Sweetcorn in an allotment – planting sweetcorn”